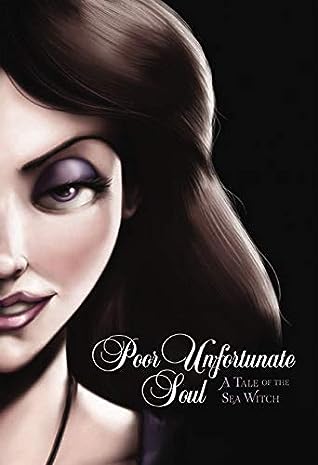 Title: Poor Unfortunate Soul, A tale of the sea witch

Synopsis from Goodreads: The tale of the sea king’s daughter Ariel is a beloved one of losing and then finding one’s own voice. The story has been told many times and in many ways. But always the mergirl always wants more than her world can offer, and her father demands that she live within the confines of his domain. Her rebelliousness costs the little mermaid her voice and nearly her soul. But the power of good prevails, and Ariel emerges proud and unchanged. And yet this is only half the story. So what of Ariel’s nemesis, Ursula, the sea witch? What led to her becoming so twisted, scorned and filled with hatred? Many tales have tried to explain her motives. Here is one account of what might have shaped the sea witch into a detestable and poor unfortunate soul.

I was so excited to get into this book. The Little Mermaid has been a long time Disney favourite of mine and I could not wait to get a glimpse of that world. And let me tell you Valentino did not disappoint in this regard. Not only were the scenes that were taken straight from the movie fantastic but she also did the character of Ursula and others justice in the new plot points of this story.

I love Ursula as a character she is just the epitome of a great villain. But one always wonders how dose a Villain of this magnitude become what they are? And Valentino with this story gave me those answers beautifully. This backstory plot was completely believable and quite frankly made me look at Triton in a completely different way. I mean he’s never been the best of characters but now he’s pretty low on my list!

I don’t read a lot of middle grade fiction but my love for Disney and in particular The Little Mermaid had me hooked enough to give it a go and to be fair this is one of few times I have not minded middle grade writing style. Its descriptive and guided enough to allow those its intended for to read and enjoy it but not too slow that older Disney lovers wouldn’t enjoy. Just like me.

The down fall to this book for me was the fact that I thought it was a standalone. Not that I wasn’t aware of the other Disney villain books but I just thought they where all stand alone and not linked in any way. Which is wrong! there is overlap. Did I enjoy hearing mention of other Disney Characters like the Beast and Maleficent? Yes! But other involvement of characters like Circe and the three witch sisters where a bit hard to catch up on their backstory and understand their relevance. As well as mentioning of goings on in previous books.

Overall, I thought this was an enjoyable middle grade read however my misjudgement on whether or not the story was a standalone caused some confusing. meaning I wasn’t able to completely engross myself in the story and world. Therefore, I am rating this one 3 out of 5 stars.

Have you read this one or any in the collection? Who is your favourite Disney villain and why? Lets chat in the comments below. Until next time happy watching and reading!