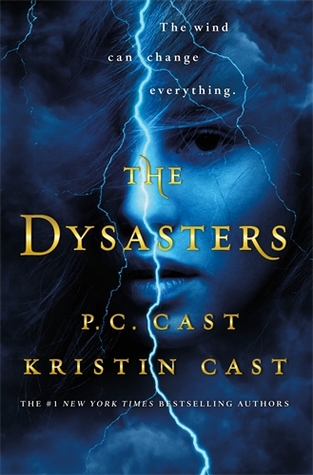 P. C. and Kristin Cast, the #1 New York Times bestselling authors of the House of Night phenomenon, return to the scene with The Dysasters – the first action-packed novel in a new paranormal fantasy series.

Adoptive daughter of a gifted scientist, Foster Stewart doesn’t live a ‘normal’ life, (not that she’d want to). But controlling cloud formations and seeing airwaves aren’t things most eighteen-year-olds can do.

Small town star quarterback and quintessential dreamy boy next door, Tate “Nighthawk” Taylor has never thought about his “extra” abilities. Sure, his night vision comes in handy during games, but who wouldn’t want that extra edge?

From the moment Foster and Tate collide, their worlds spiral and a deadly tornado forces them to work together, fully awakening their not-so-natural ability – the power to control air.

As they each deal with the tragic loss of loved ones, they’re caught by another devastating discovery – they are the first in a group of teens genetically manipulated before birth to bond with the elements, and worse… they’re being hunted.

Now, Foster and Tate must fight to control their abilities as they learn of their past, how they came to be, who’s following them, and what tomorrow will bring…

Ok this review is going to be a little saltier than my regular ones. I just don’t even really know where to start. This book put me in a reading slump almost every time I picked it up! Hence why this review is so late and why I am now so behind on my review books and haven’t read a page of anything in over 2 weeks! I am just so disappointed. I went into this expecting to really enjoy it as I am 1. a sucker for YA fantasy and 2. a huge sucker for elemental magic! This book sounded like such a cool concept and idea but unfortunately, in my opinion, it just did not deliver.

Although this read was a DNF for me I am giving it 1 star still instead of zero because it did have a handful of likeable qualities for me. Firstly as I have already said the idea/concept was a good one, just poorly executed. I also really enjoyed the illustrations throughout the book, every few pages had a comic style insert. Which I thought was a cool and unique idea. I also like that the first main character was tough and didn’t take crap from anyone. But that is where the positives ended for me.

The two main issues for me with this book were the pacing and the character choices/development. The best way I can describe the pacing of this book is like it was the reverse of normal storytelling pacing. Less than 50 pages in there is a big event that results in the destruction of nearly an entire town yet then for the next 200 odd pages nearly nothing happens it feels slow and boring and a little anticlimactic after the dramatic start.

The other issue I have is something I tend to feel about a lot of Cast’s books is that many of the characters feel forced and like the authours are trying to hard to be diverse and put every possible character type/personality etc into the story. Now do not come for me, I am a huge advocate for diverse books and love reads that people can find a little of themselves in and relate to. But when this is done well! When the characters feel like real people and their race, gender and or sexuality feels genuine and real. If that makes any sense. Basically, I don’t think you need to have every type of person represented in your book in order for it to be diverse and when you do try to put that much in, it can feel forced. Which concerns me in terms of how the representation feels to those the characters are meant to be representing.

In conclusion, this book is the first book I have DNF in a very long time. I tried so hard, pushed through for months until finally with only about 70 pages left I just couldn’t waste any more of my time and energy on it. A cool concept that was poorly executed and weirdly paced. This read just was not for me!

Have you read this one? What did you think of it? What element would you like to control if you could control one? Let me know in the comments below! Until next time happy watching and reading!