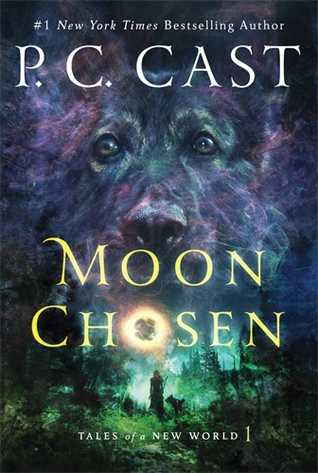 New York Times bestselling author P.C. Cast brings us a new epic fantasy set in a world where humans, their animal allies, and the earth itself has been drastically changed. A world filled with beauty and danger and cruelty…

Mari is an Earth Walker, heir to the unique healing powers of her Clan; but she has cast her duties aside, until she is chosen by a special animal ally, altering her destiny forever. When a deadly attack tears her world apart, Mari reveals the strength of her powers and the forbidden secret of her dual nature as she embarks on a mission to save her people. It is not until Nik, the son of the leader from a rival clan, strays across her path, that Mari experiences something she has never felt before.

Now, darkness is coming, and with it, a force, more terrible and destructive than the world has ever seen, leaving Mari to cast the shadows from the earth. By forming a tumultuous alliance with Nik, she must make herself ready. Ready to save her people. Ready to save herself and Nik.

Thank you to Pan Australia for sending me a copy of this book in exchange for my honest review.

I think for this review I will start with the things I loved and then move onto the things that were OK or that I am not so sure about.

I absolutely love this cover! It gives such a magical/ mystical vibe and uses all of my favourite cool tone colours! However, you would be forgiven for thinking this book had anything to do with werewolf’s! This is what I expected going in and it was not the case! That is in fact a German Shepard on the cover, not a wolf. Similarly, to do with the composition of the book, I loved the full-page sketches at the start of each chapter. These gave a little something extra to the story and linked in with the main character being an artist/ having a love for drawing.

I really love the concept of this world and the “magic” system and just the overall idea. It is very unique, and I haven’t personally read anything similar. The story is set in the future many years after a apocalyptic event. From what I can work out, the earth was scorched because humans were too interested in technology and stopped caring for and paying attention to the earth and nature. After these events those who survived went different ways and eventually turned into the groups we read about in the story.

The main groups the story revolves around are the Earth walkers who rely on the moon for healing and other magical gifts. The Tree tribe or Companions which have the power of the sun, and this is where the Shepard’s come in as this tribe has magical links with dogs. And lastly the Skin Stealers, those who stayed in the city after the destruction of earth and suffer from a pretty bad skin condition haha. We also hear mention of cat people and wind riders/ horse people which I believe we will hear more about in books two and three.

I really like how each group and magical aspect was introduced. There was a lot of information and although it felt a little overwhelming at times it didn’t feel info dumpy. everything was very descriptive, and I could easily picture what was going on in my head. P C Cast also seemed to try to address/ include some pretty serious issues and themes. Which I personally thought gave the story more meaning.

Now this book is advertised and a YA series however I think that it is more of an NA series. As most of the main characters are 18 years of age or older with only a few younger side characters. This along with the themes that include: depression, suicide, rape, racism and violence. Make for a more mature story in my opinion. If any of these topics are triggers for you I would suggest thinking carefully before picking this book up as some of them are very prevalent throughout the whole story.

Although I loved the uniqueness of this story and it wasn’t info dumpy, it was fairly slow or a slow burn/build. This story likely could have been 50 to 100 pages shorter. For the first 350 pages or so nothing really action packed occurs. There are some little incidences where things occur, and you think it might ramp up but then the story moves along again. This story is very character driven. This didn’t bother me too much as it felt like I was still learning and uncovering interesting things about the world. But it is different to what I am used to and was a struggle at times. Don’t worry though the last part of the book really amps up and builds to some interesting plot twists/ occurrences which I think will take the next book in a more fast paced direction.

The only other thing I was unsure about is the way Cast tackles the idea of racism in this book. Personally, I think she was trying to represent how people are not born racist they are raised and taught those ways by others. And how it is important not to judge people by the colour of their skin/ culture especially when you do not have the whole story. However, I can see that some things such as the MC darkening her skin with clay to fit in could been taken in a bad way.

In conclusion, I found this world and concept for the story very interesting and unique. I loved learning about the different groups of people and the “magic’ system. And despite this book not being very action packed and pretty slow for the most part. I did enjoy it and am excited to see where in goes next! Which is why I rated this story a solid 3 stars!